Warp Chamber - Abdication of the Mind 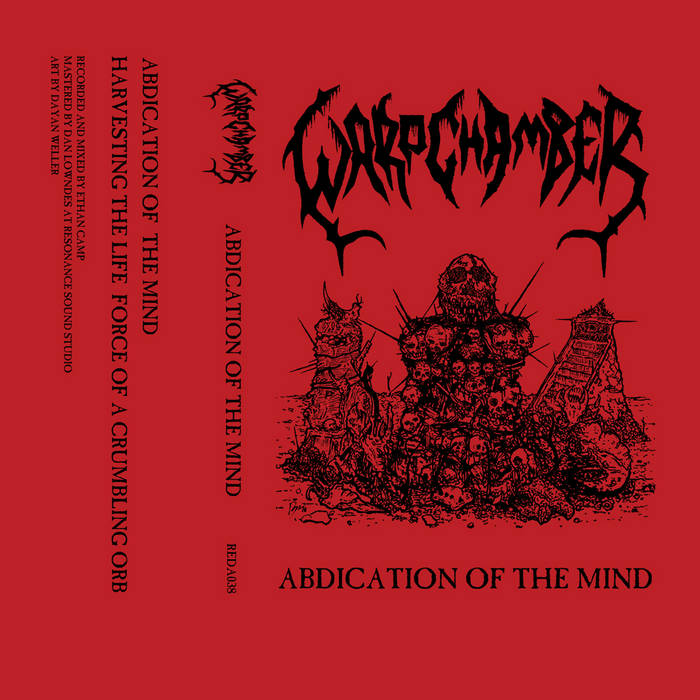 chris_topher_mc While the word "trend" typically has a bit of a negative connotation, I can't help but be ecstatic about the flood of bands who seem to be melding the very best components of early 90s Swedish, Finnish and Florida Death Metal. They seem to be doing it in a way that did not quite come to fruition in the mid to late 90s the way the current horde is accomplishing. Perhaps it is simply the unfettered access to literally every legendary and obscure cult album on the internet. It has cross pollinated these bands in a great way, and Warp Chamber is a prime example of this spectacular scene.

heavy low end, audible bass, atypical melodic lead components and cavernous vocals. what's not to love. the groove at the end of Abdication of the mind is unexpected and very welcome.

Veggietales From The Crypt

"Indeed, once I hit play on “Abdication of the Mind,” I was struck by a storm of classic, raw death metal with slightly technical edge. As the band states, there’s a lot of early Suffocation (especially the Human Waste-era), Nocturnus, Demilich and demo-era Morbid Angel weaved into the various threads here."
- Decibel Magazine
goo.gl/o6sbB8

“This is otherworldly intransigence from an unusual and distant domain, making a vile incursion into our own. Hail and riff.”
- Toilet ov Hell
goo.gl/HdPMME

"A nightmarish level of heaviness is what greets us on the two tracks that make up this demo. Both are raging numbers with guttural vocals, screeching guitars and skull-cracking drums filling every inch. It’s death metal and with that comes expectation, expectation that Warp Chamber are happy to be challenged with. For all its familiar style, there is plenty here to get excited about."
- Games, Brrraaains, and a Headbanging Life
goo.gl/N1XU25

"Only few knew about Warp Chamber until Redefining Darkness welcomed the band into the fold along other luminaries such as Skullcrush, Oxygen Destroyer, and Cist. True these names wont get you special seats for fine dining but it is a start. Much like other Redefining Darkness releases, Warp Chamber makes no apologies and breaks glass with old glass breaking techniques in the vein of Morbid Angel if the band read too many science fiction magazines. Come for absolution. Come for Obliteration."
- Tape Wyrm
tapewyrmmetal.com/archives/2711#more-2711

"Taking inspiration from the obvious death metal greats--they cite Suffocation, Morbid Angel, and Demilich, but you could honestly take your pick of early 90’s death metal and call it a wrap--Warp Chamber is an exercise in chaos. Unlike these early influencers, however, individual Warp Chamber songs never feel tied to a central theme. Featuring two tracks of respectable length, Abdication of the Mind is a pummeling voyage through brief soundscapes. In the midst of exploration, some moments seem to lurch deliberately--like a subway car that is perpetually achieving a little too much momentum before each stop, Warp Chamber often applies the brakes with a gleeful aggression, before launching once more into a breakneck pace. If you prefer a musical comparison, think early Dying Fetus’ tendency to adjust tempo at the drop of a hat, perhaps mixed with Nocturnus’ excitable and perpetually shifting riffage. The result is a constantly evolving piece of music. The growls and guitar weave and wend, the drums lurch, and both tracks are stitched together with unexpected complexity and technicality."
- Sleeping Village Reviews
www.sleepingvillagereviews.com/reviews/warp-chamber-abdication-of-the-mind

"a very professional sounding demo that sends the message that Warp Chamber is a death metal band to be reckoned with in the future."
- The Mighty Decibel
goo.gl/SvRUR4


Warp Chamber is a death metal band from the United States that draws influence from early Suffocation, Morbid Angel, and Demilich.

Once you hit play, be prepared to be launched through a universe spanning multiple dimensions, twisting and spiraling until you are finally hurled into an endless vortex. Fans of Timeghoul, Nocturnus, and Demilich should feel right at home in the Science Fiction nightmare Warp Chamber weave.