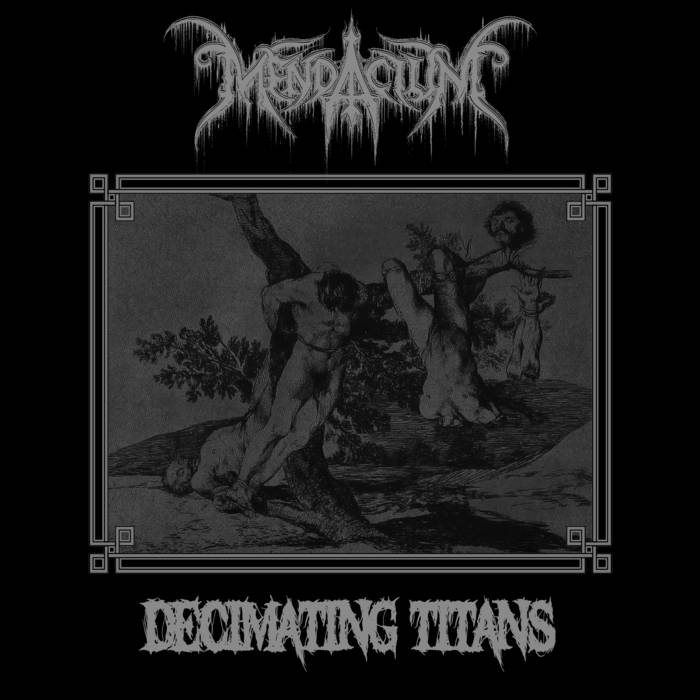 " As demonstrated by the de facto title track, “Decimating the Titans,” the EP is the perfect mix of vitriolic and catchy. It’s like laying down on the world’s most comfortable memory foam mattress right before an avalanche of rocks caves your roof in on top of you. "
-Axl Rosenberg, Metal Sucks
www.metalsucks.net/2018/01/10/get-decimated-by-mendaciums-decimating-titans/

"...the title track pretty much sums up what you should expect from the project – relentless blackened death metal from hell."
-Greg Kennelty, Metal Injection
www.metalinjection.net/av/new-music/mendaciums-new-song-decimating-titans-levels-everything-with-crushing-black-metal

"Point blank: The last time I heard riffs this original and menacing was Trey Azagthoth’s work with Morbid Angel."
-The Noise Beneath the Snow
noisebeneaththesnow.com/2018/01/10/mendacium-decimating-titans-album-tape-review-black-death-metal/

"...the music is possessed of a passion and rage that feels absolutely necessary, and as a result there is a cathartic element to the EP that is often lacking in this style of music."
-The Sound Not the Word
thesoundnottheword.wordpress.com/2018/01/10/album-of-the-day-mendacium-decimating-titans/#more-15596

Mendacium is the work of Daniel Jackson, better known for his work in Void Ritual. Mendacium's debut EP, Decimating Titans, is a violent mixture of black and death metal, mirroring the viciousness and cruelty of our times. Though the lyrics will not be made available, a theme does run throughout: a barbaric fantasy of revenge against a society plagued by bigotry and a country bending to the will of conservative evangelists. The music draws inspiration from the pitch black sounds of early Immortal, Emperor, and Angelcorpse, with a theme just as bleak.

While Mendacium released the 3 song EP through their Bandcamp page in October of this past year, Redefining Darkness Records will be releasing the EP w/ a NEW bonus track, "Eviscerate", digitially via iTunes, Spotify, etc, as well as a cassette limited to only 50 copies worldwide!

All songs written and recorded from spring to fall of 2017.